I admired Luke Jerram’s spectacular public realm work way before ever meeting him. Indeed, he often jokes that Bloomberg Television described him as “probably the most famous artist you’ve never heard of”.

Luke has an incredibly diverse, seemingly boundary free creative practice. I'm amazed by the range and scope of his ideas, the scale of ambition, impact and reach of his works, but also his dedication to connecting and engaging a broad audience. He is an expansive creative, who sees opportunities in every potential challenge or roadblock.

His creative entrepreneurialism enables him to partner with global organisations and collaborators, continuously innovating whilst supporting others, particularly young creatives.

Luke took time out of his busy schedule to answer answers my questions candidly in the first video below, reflecting on some of the habits that contribute to his committed studio practice, his creative process, how he earns income from his practice and makes the most of 'failures'.

His responses reveal an approach, attitude and work ethic that facilitates creative problem solving and the capacity to manage multiple productions simultaneously. His personal system and studio set up enables him to be resilient and respond quickly and effectively to challenging briefs, budgets, contexts and environments.

Scroll down for the second video, which demonstrates Luke's creative process in action, for a new project in development: Helios.

Luke Jerram is renowned globally for his multidisciplinary creative practice, which includes sculptures, installations, live arts and public realm projects. Living in the UK, but working internationally since 1997, he’s devised and staged an extraordinary range of art works that have engaged and inspired people around the world.

His artworks are in permanent collections including the Metropolitan Museum of Art in New York and the Wellcome Collection in London, and he tours his installations to art festivals and museums. Working with some of the most established cultural organisations to create his artworks, in 2019 alone, he had 117 exhibitions in 22 different countries around the world.

In 2020 was given an Honorary Doctorate from the University of Bristol, made an Honorary Academician of the RWA and Fellow of the Royal Astronomical Society.

In 2019 he set up and funded both the Dreamtime Fellowship to support recent graduates in his home city of Bristol and the Bristol Schools Arts Fund to support secondary schools in Bristol impacted by austerity. 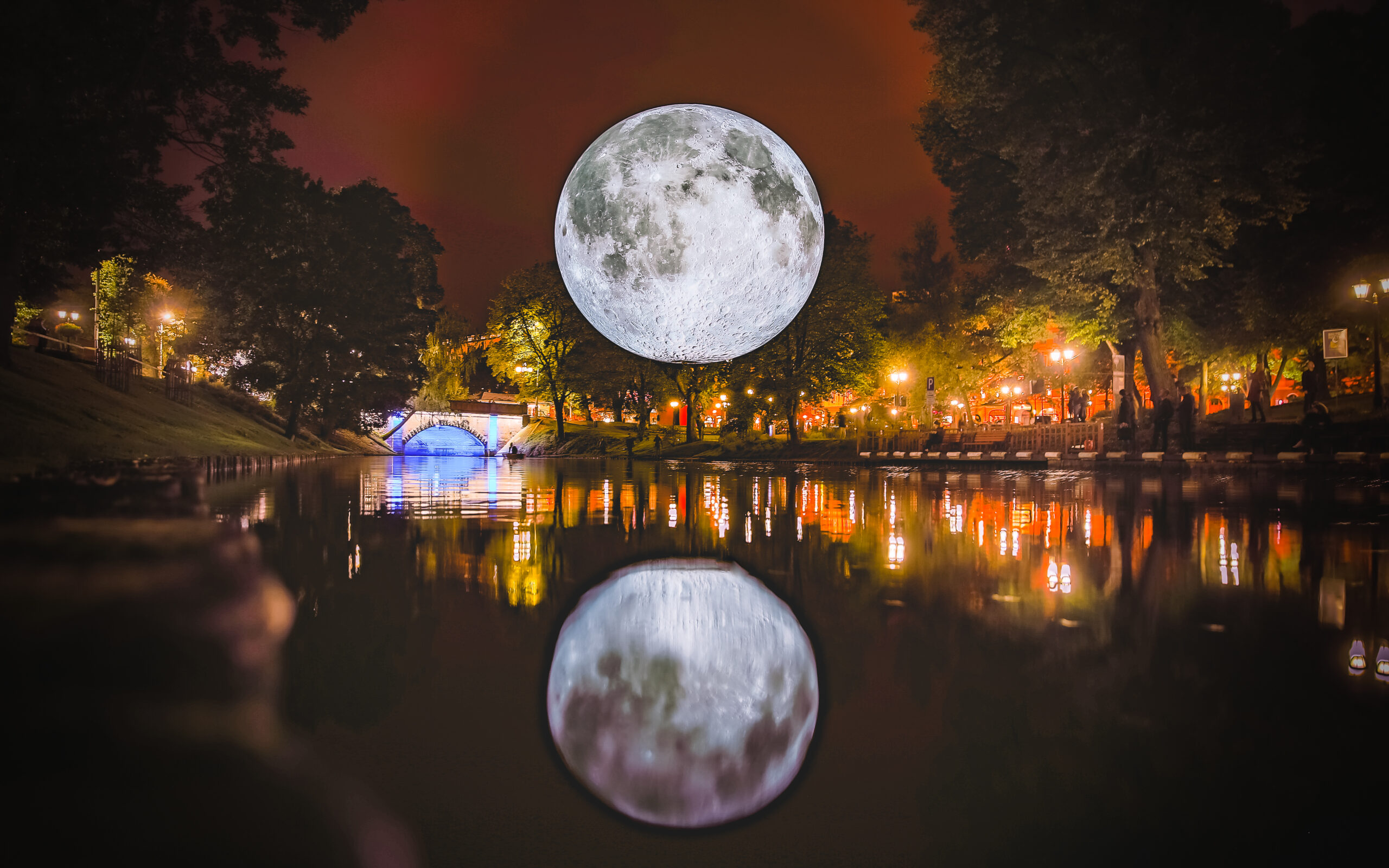 Luke Jerram, Museum of the Moon, Photo by Robert Sils

His artwork Museum of the Moon is one of Luke’s most successful arts projects that has caught the public’s imagination, presented in more than 150 times in 30 different countries. Experienced by more than 10 million people worldwide, the artwork has recently toured India with the British Council, been presented at the Commonwealth Games in Australia, Art Basel in Miami 2020 and exhibited in Aarhus, Denmark for the European Capital of Culture. In 2019 it was presented at Glastonbury Festival and even on BBC’s Strictly Come Dancing in Blackpool. With universal appeal, the exhibit has been breaking audience records in venues around the globe. 2.1 million people visited the artwork when it was presented at the National History Museum, making it one of the most popular exhibits in the institutions history. Published in 2020 his new book Luke Jerram: Art, Science & Play provides a fascinating insight into his evolving practice. 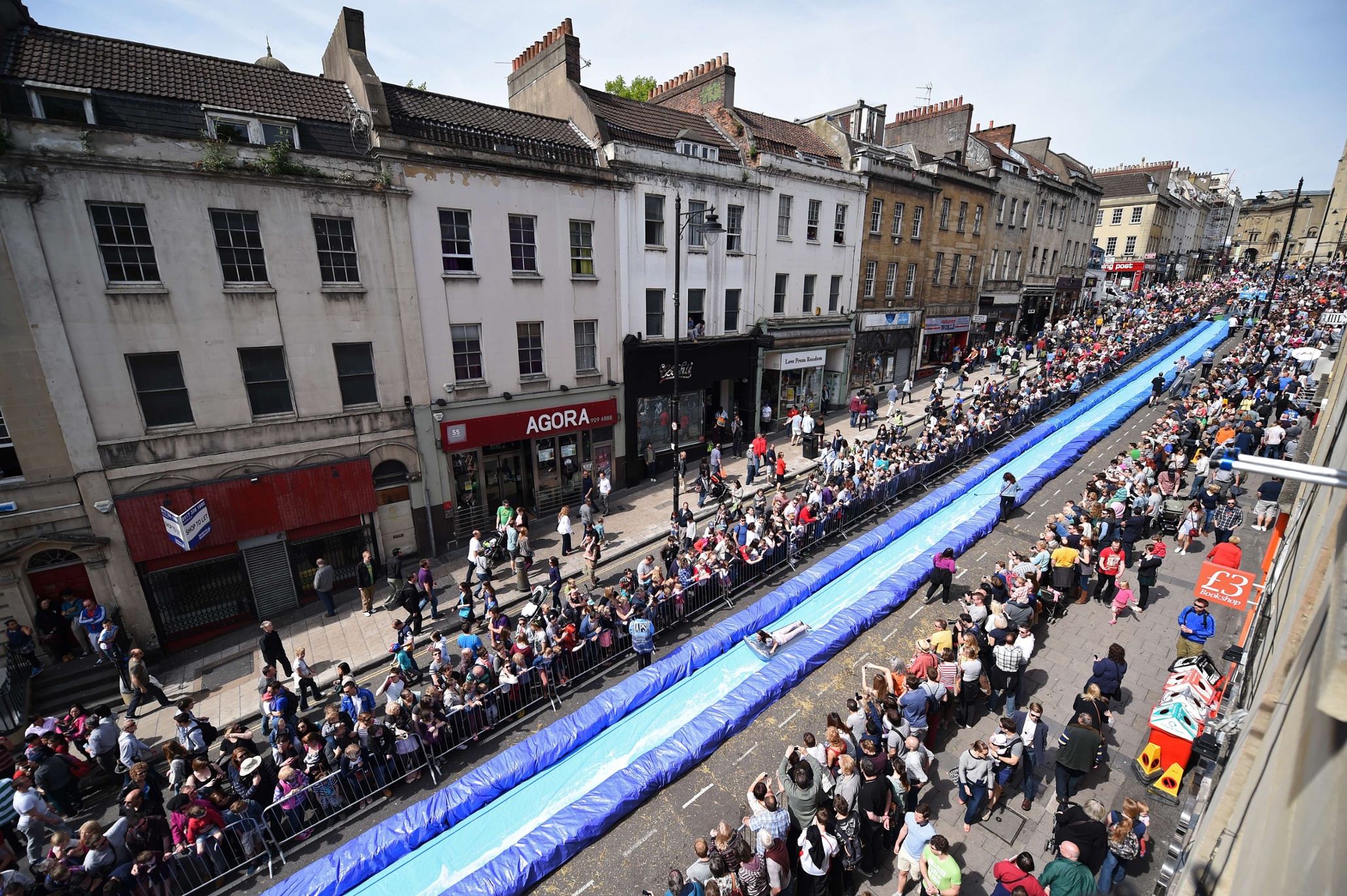 On the 4th May 2014 this giant 95m (300ft) water slide was installed on Park Street in Bristol as part of Make Sunday Special and the Bristol Art Weekender. Running for one day only, 96,573 people signed up for their chance to get a ‘ticket to slide’ and through a ballot, only 360 lucky people were issued with tickets. Security clocked in 65,000 people who came to Park Street to watch the one-day event. 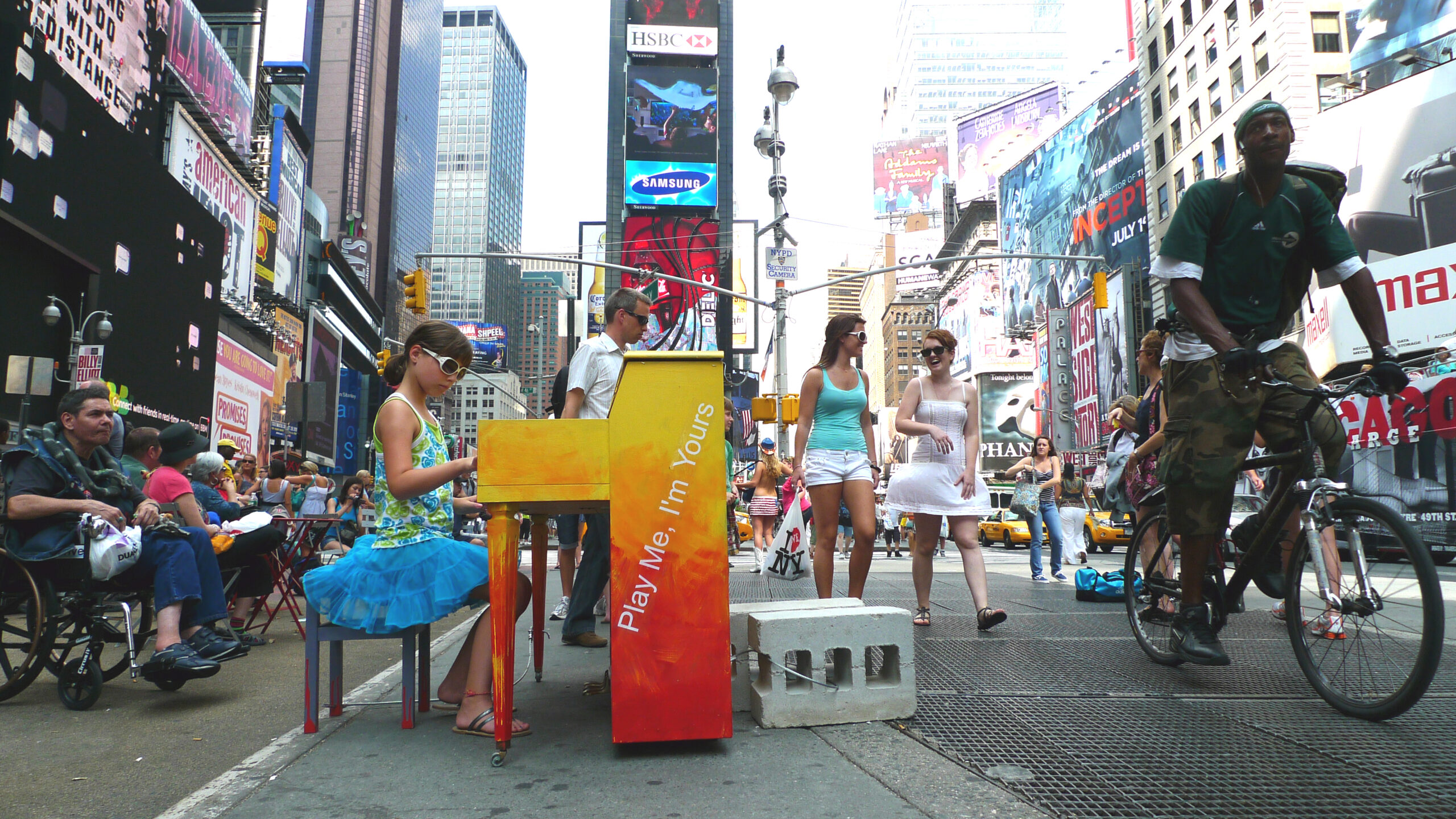 Touring internationally since 2008, Play Me, I’m Yours has reached millions of people worldwide, with more than 2000 street pianos installed by Luke and his team in over 65 cities across the globe, from  Tokyo to New York, bearing the simple instruction to ‘Play Me, I’m Yours’. Located on streets, in public parks, markets and train stations the pianos are available for everyone to play and enjoy. Play Me, I’m Yours invites the public to engage with, activate and take ownership of their urban environment, and to share their love of music and the visual arts. Decorated by local artists and community groups, the street pianos create a place for exchange and an opportunity for people to connect. The project was recently presented in Brisbane, Australia and Augsburg, Germany. 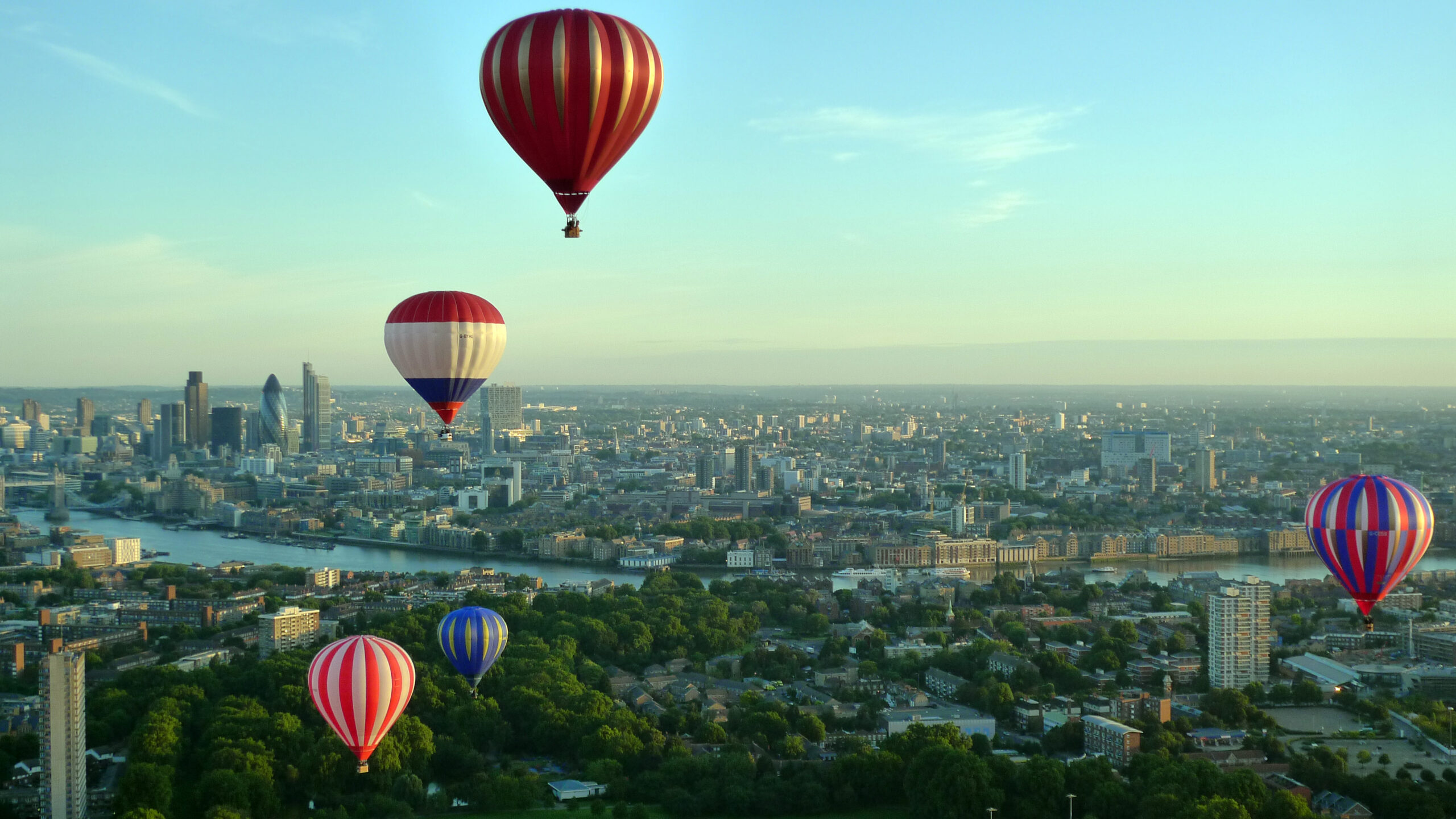 Sky Orchestra is an experimental artwork bringing together performance and music to create visual audio installations within the air and within the mind. Developing music specifically for sleeping people which is delivered at dawn from out of the sky the artwork is created by artist Luke Jerram in collaboration with composer Dan Jones. Taking off at dawn with speakers attached, the artwork creates a massive audio landscape which plays directly into people's homes below.

The Sky Orchestra last performed in Bristol 2020, with a new composition commissioned by Bristol Old Vic; the music is available from Bandcamp, raising money to support young musicians in Bristol.

The Sky Orchestra has also performed in Derry, for the UK City of Culture 2013 and in London to herald a year to go to the 2012 Olympic Games. They launched the 2007 Sydney Festival and in 2006 in Stratford-upon- Avon for the Royal Shakespeare Company.

Luke Jerram, Journey to the Sun: the development of Helios, 2021, London

In Greek mythology Helios was the god and personification of the Sun. This new artwork was conceived in the UK’s third national lockdown, in the middle of winter, when we all needed a little warmth and sunshine in our lives.

Based on complex geometry Luke is working with engineers and fabricators to design and create this floating sculpture of the Sun; 10m in diameter and 5m high, the giant floating Sun artwork will be made of steel and moored to the walls of the docks in London. Created as a hemisphere, the lower half of the Sun will be created from the reflection in the water. Glowing gold in the daytime, the artwork will change in the day, as the sun illuminates it, creating reflections. At night the artwork will slowly begin to come alive.

Internally illuminated and emitting mist, the artwork will bathe the docks with warm golden light. It might look like a fireball at night or as though a meteorite has crash landed. A surround sound composition about the Sun will be created which will available as a free download to be listen to through the public’s headphones. Information about the artwork and the music will be available on the dockside. The music will blend NASA sunlight recordings, sun mythologies, sound of fire and heat. Artistic development, CAD designs, structural analysis, costing, prototyping and testing have all been carried out for this new and complex work. Luke is consulting with naval architects, structural engineers, CAD designers, arts fabricators and even sub aqua divers about the creation and installation of the artwork. Phase 1 has been completed and they are now awaiting funding for the fabrication. 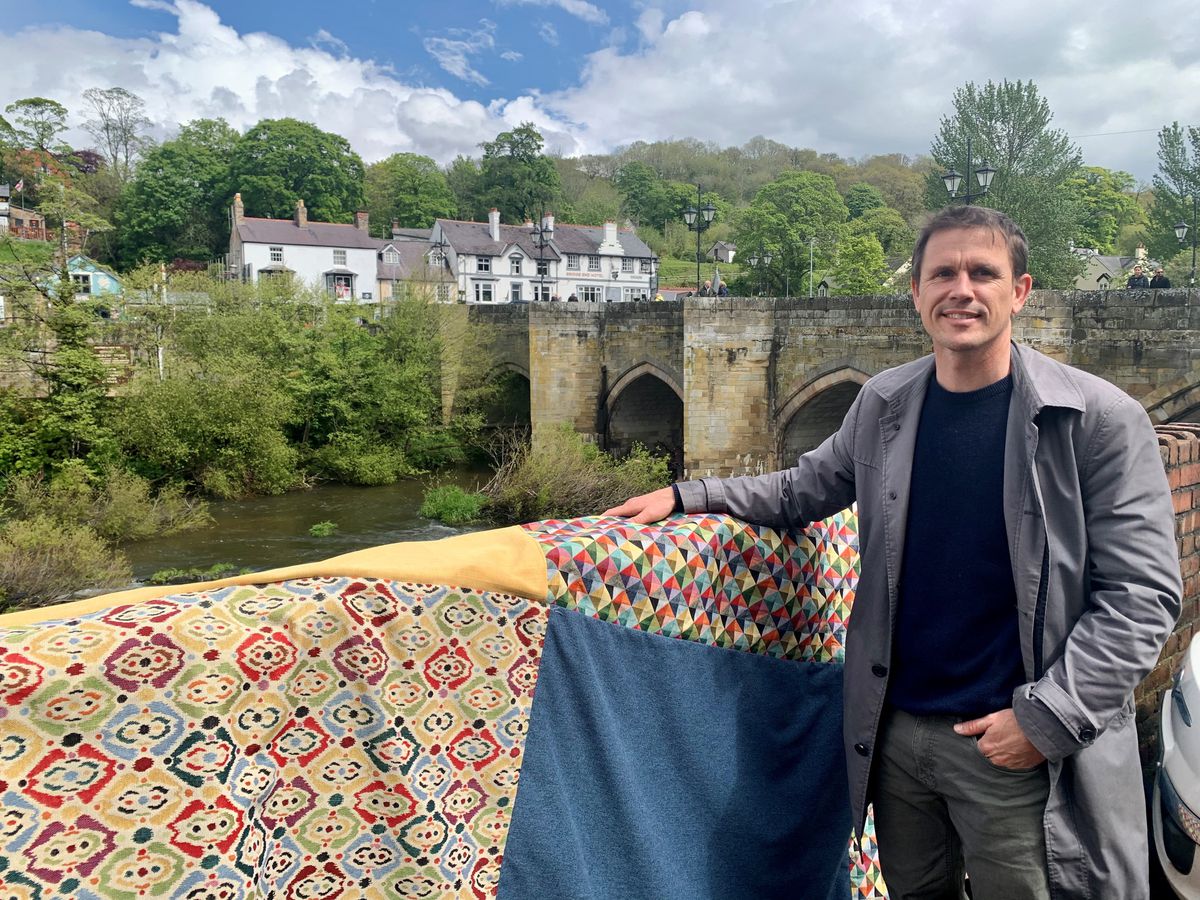 This new temporary installation artwork has been commissioned by the Eisteddfod in Llangollen, for presentation 9th July- 4th August 2021. With support from the Welsh Government, this will be Luke’s first major commission for the country.

The Eisteddfod has a long and rich history of working with different communities and nations across the world to bring people together to share their creativity and a message of peace.

“When I first saw Llangollen Bridge I fell in love with it. It’s so iconic and at the heart of the town. Across the world, bridges have always been used as both a physical and symbolic way to connect people – which fits perfectly with the aims and ambitions of the Eisteddfod. I can’t wait to see the patchworks the creative people from the local community send in, in order to turn the bridge into a work of art.”

The 60m long bridge will be wrapped both sides in giant patchwork to reflect the crafts and cultures of Wales, but also the participating nations of the Eisteddfod. Transforming the bridge into a work of art, the colours are inspired by the incredible fabrics worn by the festival performers. The artwork brings the Eisteddfod’s creativity out from the festival field, into the town, transforming and animating Llangollen for the whole world to see. From every angle the bridge will be an incredible sight to see, changing with the light and weather conditions. Even the water will be transformed with its reflections of colour from the bridge.

This website uses cookies to improve your experience while you navigate through the website. Out of these cookies, the cookies that are categorized as necessary are stored on your browser as they are essential for the working of basic functionalities of the website. We also use third-party cookies that help us analyze and understand how you use this website. These cookies will be stored in your browser only with your consent. You also have the option to opt-out of these cookies. But opting out of some of these cookies may have an effect on your browsing experience.
Necessary Always Enabled
Necessary cookies are absolutely essential for the website to function properly. This category only includes cookies that ensures basic functionalities and security features of the website. These cookies do not store any personal information.
Non-necessary
Any cookies that may not be particularly necessary for the website to function and is used specifically to collect user personal data via analytics, ads, other embedded contents are termed as non-necessary cookies. It is mandatory to procure user consent prior to running these cookies on your website.
SAVE & ACCEPT
SUBSCRIBE